Ba-ro-me-ter
Version 2 for piano solo with fixed media. First performance 22 March 2018 at Fylkingen, Stockholm by Kristine Scholz.
The electronic part consists of some of the earliest recorded sounds from the mid 19th century, used under CC from firstsounds.org

Boom-choff-leuit
3-4 amplified flutes with 6-8 co-players
The thought of three flutists (or more) playing together has always given me kicks. There is something about flute that is a bit geeky, whimpy and uncool. Like the opposite of hardcore. I wanted to change that and give the flute tools and surroundings to come out as that party-flute it used to be.

Played and commissioned by Krock
score 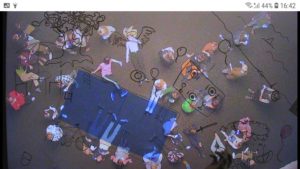 Halusin
As a swede it is fascinating to live next to a country with a totally different language as Finnish is to Swedish. Still I have through the years picked up a few useful phrases from shampoo-bottles, electric heaters (the classical Ei saa peitää – do not cover), chewing-gum packages and helpful friends. By chance I went with Finnair when composing this piece, with a stop in Helsinki airport Vantaa. There, in a record shop, I found the two famous finnish tangos which Halusin is built on ; Unikuva (the Dream) and Satumaa (Fairytale Land). (I wanted)

Han
A cutup piece inspired by the worship of (a male) God. (He)

Orgel
Orgel is a visual installation and a musical piece, where the visitors are the orchestra and a part of the performance. It consists of nine hanging organs, each has its own sound, just like a pipe organ. It is about a playful exploration of materials and sounds that are made in a non hierarchic way together with the audience. Together with Johanna Mårtensson.

R®(r)
A soundplay about the letter R.
Commissioned by the Swedish Radio P1 and P2. Text by Pär Thörn, Music by Ida Lundén.

Songs My Mothers Taught Me
Cello and electronics. 100 years ago the recording facilities weren’t as common and accessible as they are today. Luckily some of the recordings from that era still exist.
Composing music for the cellist Hanna Dahlkvist I wanted to give her an enclosing string orchestra of ancestors, a warm embrace of forerunners. Female forerunners. Digging deep in the archives I found instrumentalists and composers who were famous and successful when they were active. Names like Beatrice Harrison, Guilhermina Suggia, Renée Chemet and others.
This piece is a celebration of all these women, of all the mothers before me, and of all the songs still to be sung. 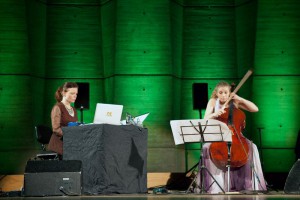 Spänst åt alla (vigour to everyone)
Sit down gymnastics with the voice of Princess Birgitta of Sweden in a cut up piece for live-electronics and armchair.